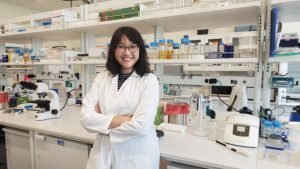 This interview is part of our Meet-a-Scientist series.

Bacteriophages (or phages) are everywhere. With an estimated 1031 phages on Earth (that’s 10 with 31 zeros behind), the ubiquitous viruses outnumber every other organism.
In a recent article adapted by Science Journal for Kids, researcher Tiffany Luong explored clinical reports of phage therapy over the last 15 years to evaluate its success against bacterial infections in the age of antibiotic resistance. We had the unique opportunity to speak with Tiffany – a graduate student immersed in this evolving field – about phage therapy’s wide-reaching potential to combat infectious diseases.

Hi Tiffany, can you tell us a bit about yourself?

I was born and raised in Southern California. I’m a first-generation Chinese American, my parents immigrated from Vietnam when they were young. After graduating high school I went to UCLA for undergrad. As far as hobbies go, I’m really into food, that’s probably where I feel most connected to my culture. I love all kinds of Asian food — whether it’s Chinese, Japanese, Vietnamese — pretty much anything. I also like video games and travelling.

Why did you enter the field of cellular and molecular biology?

My interest in science stemmed from early in my high school days when I was a member of my debate team. That was the first time I got serious about the very things happening in our country. So when I went to college I decided to pursue science. A mentor of mine introduced me to lab work and I really fell in love with it. After graduating from UCLA I worked as a technician in a lab at Caltech for two years and then decided that I really wanted to drive my own project. So I decided to apply for a PhD and came to San Diego State University.

What sparked your interest in bacteriophages?

I actually had no idea that I would be interested in bacteriophages or microbiology. I had never even touched a test tube in my life until then! It was a very different experience. But as soon as I started working with phages it really piqued my interest as something that was both interesting to study the basic biology of and that had very clinical approaches.

How prevalent are bacterial infections?

Even the common person usually gets an ear infection or strep throat or some other bacteria-related infection each year. So we’re all pretty used to being prescribed antibiotics and taking them.

Why did you decide to look into phage therapy as an alternative to antibiotics?

Because we have a problem with bacterial antibiotic resistance. Even though a lot of us are really regimented when we take our antibiotics, some people don’t understand that if you take five out of seven days of your prescribed antibiotic course it can actually lead to the development of antibiotic-resistant bacteria. Hospitals in some countries and areas are really impacted by this. So phages are really interesting because they’re an alternative to antibiotics that can actively replicate and kill bacteria in the body.

Are there any associated risks with phage therapy (in the short-term or long-term scales)?

One of the immediate risks is that phage therapy is still not approved by the FDA (Food and Drug Administration). It is allowed for use only as an emergency investigational drug. But it can be approved given that the correct measures are taken to make sure the phage product is clean and good for use.

In your article you report that doctors often used a combination of phages and antibiotics. Why?

In your research you uncovered that phages can potentially change a patient’s microbiome. Is that a problem?

The nice thing about phages compared to antibiotics is that phages are really pathogen-specific. For instance, if the doctor comes back and tells you that your infection is being caused by E. coli, an E. coli phage that you’re given would only wipe out the E. coli bacteria – nothing else. Whereas if you were given an antibiotic it would wipe out anything that stood in its way. Phages can alter the microbiome a bit but it doesn’t seem like they change it as much as antibiotics do.

What are you currently working on in the lab at San Diego State University?

I’m working on a couple of different projects but my main one is studying how phages interact with mammalian cells. We’re really interested in making phage therapy work. In order to do that we not only have to understand the interactions between phages and the bacteria they kill but also how our immune system reacts to phages.

What does it mean to be a scientist?

Being a scientist means being able to think of exciting questions and trying to find ways to answer them. That’s something I’m learning more as a PhD student — being able to ask a question and trying to either find an answer in someone else’s research or develop a plan to answer it on my own. I am really finding myself challenging all my beliefs. Every time there’s a new piece of data or just in normal life if there’s something that challenges me, I become more accepting of piecing together different things to find the facts. It’s all about fact-finding and just, as my lab chief scientist likes to say, “going with the biology.”

What advice do you have for students looking to get into science?

Sometimes it’s really intimidating to look for opportunities. I was really lucky because I had this mentor at UCLA who just happened to be looking for an undergraduate assistant at her lab at Caltech. It’s easier said than done, but look for opportunities to work in a lab even if you’re intimated to ask because you never know what the answer might be.

What are your future career goals?

Right now, I’m working on my thesis, publishing papers and other typical grad school things. But after my PhD, I would really love to work somewhere in the realm of phages, the microbiome, or immunology. Eventually, I would like to open a lab of my own and really spearhead the types of questions I want to ask. I want to mentor students, especially those who love going out for food. I would love nothing more than to treat students to boba everyday on my salary. That’s my ideal world.

Conducted for SJK by Maxine Mouly

See all of our ‘meet-a-scientist’ interviews and read Tiffany’s research paper below:

Can viruses save lives? 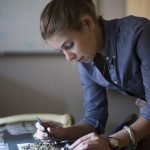 How do gender stereotypes impact girls’ interest in science?

Researchers investigated the impact of gender stereotypes favoring boys in computer science and engineering on children and adolescents.

How much plastic from the pandemic ends up in the ocean?

Researchers wanted to find out how much extra plastic waste from the pandemic has entered the ocean.

Why do ducklings swim in a line behind their mother?

Scientists created a mathematical model to figure out why swimming in a line benefits baby ducks and geese.

How do chemicals affect animals (and their kids)?

Researchers wanted to compare the effects of endocrine-disrupting chemicals on different animals and their offspring.