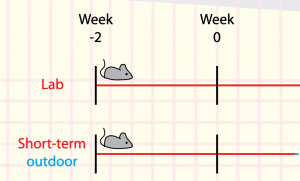 Kids love to discover new things. That’s why we like to give them access to recent scientific research! In these four adaptations, we have brought peer-reviewed scientific papers down from the kind of language you find in academic journals to plain English that 5th graders can understand.

Your pre-teen students will get a taste of what’s new in science and why it matters as they follow the researchers through the steps of the scientific method. Most of the articles focus on animals, including issues such as biodiversity, conservation, and human impacts on the world.

For convenience, you can download all the articles at once:

In this article, scientists found out that beavers’ activities can protect plants and animals around them during a wildfire. There is an extensive lesson plan with town-hall role-play activity and an audio version of the article available for auditory learners or students with visual disabilities.

Why do bats need more food to call louder?

In this article, scientists wanted to find out if bats needed more energy to echolocate loudly. The students get to follow the researcher into a wind tunnel at the Leibniz Institute for Zoo and Wildlife Research where bats’ metabolism is tested under various experimental conditions. The results are presented as a scatter plot. There is an audio version of the article available for auditory learners or students with visual disabilities.

In this article, concepts such as niche differentiation and resources partitioning are explained using the example of a joint coloring activity where each student wants to use a color but there are only so many yellow pencils. For this study, the researchers used GPS tracking data and field observations to determine how different species of seabirds can live together by learning how to divide their limited food resources. The results are presented as a bar graph and there is also a map of the study location in Canada.

How can your smartphone make water safe to drink?

In this technology-oriented article, inventors from the Georgia Institute of Technology developed a small device and an app that can be used with a smartphone to kill harmful bacteria in water. The human need for clean water is discussed and students can learn how a cell phone can help disinfect water so that it won’t make people who drink it sick. The article contains a pictogram of the device and an audio version for auditory learners or students with visual disabilities

Are poachers rhinos’ only problem?

In this article, students get to take a close look at Kruger National Park in South Africa, where many rhinoceroses live. The scientists already knew that poaching is a major threat to rhinos, but they were also interested in the impact of drought on the survival of the two different species in the park: white and black rhino. The researchers compared the rates of birth and death (from both natural causes and illegal hunting) for periods before, during, and after the drought. The results are presented in two simple line graphs, but students will need to be careful about the differing y-axis scales. Like the scientists, students will be pleased to learn that the obvious threat of poaching decreased for both species across the four-year period. However, they might be surprised to find out that the two species were affected differently by the drought – which helps illustrate the importance of paying attention to climate factors in preserving endangered species.

Where does Australia’s wildlife hide?

Kids are excited to spot wild animals near their schools and homes. They’ll likely be curious about the same question scientists in Australia asked: how much threatened wildlife lives in our cities? The researchers overlapped maps of species habitats with maps of urban areas and discovered that half of the threatened animals and a quarter of the threatened plants in Australia live in cities! We present a simplified map for students to examine and also include a few statistics from the US and the UK for comparison. Students will consider some ways we can make our cities more wildlife-friendly to help threatened species survive.

Counting the fish catch – why don’t the numbers match?

We actually created two versions of this adaptation, so you’ll need to scroll down the page to find the link to the elementary/middle-school version. Researchers in this article carried out a data collection project to calculate total catches from all marine fisheries in the world from 1950 to 2010. Students will quickly realize how complicated a task it is to track the many different kinds of fisheries. A line graph shows the total reconstructed catch figures peak at a much higher amount in comparison to the officially reported figures – and that they are now declining much faster than people thought. Students will understand how important it is to have accurate data in order for people to make the right decisions to protect global fish stocks.

What happens if we take laboratory mice outside?

This adaptation introduces students to the idea of a mouse model, explaining how scientists use mice as a model organism to learn more about human bodies. However, in this article, scientists wondered how well mice in the laboratory actually model real life. So they decided to test how a realistic environment impacts the ability of mice to fight off intestinal worms. They compared a group of mice who lived only in the lab, a group that lived only outdoors, and a group that moved from the lab to the outdoors. A pictograph helps to illustrate the method and timing. The final worm count and worm biomass are presented in scatter plots and show that the mice that lived outdoors the longest developed fatter and longer worms in their guts. Students will realize how important it is for experimental design to include different environmental conditions.

Our site offers hundreds of scientific articles suitable for students of all ages. Check for the latest elementary or middle school level articles. Everything is free to download! Just use the filter to find the ones you need. 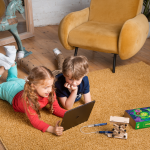 Researchers found out that beavers’ activities can protect plants and animals around them during a wildfire.

How do some algae make the Earth warmer?

Scientists figure out how and why algae produce nitrous oxide, a greenhouse gas stronger than carbon dioxide.

What can ancient DNA tell us about Stone Age people?

Researchers analyzed DNA from the oldest Late Stone Age human specimens ever found in Europe and discovered that these people had recent Neanderthal ancestors.

Did you like this collection of high-quality FREE scientific articles?

Wanna know when we publish a new article?