9 scientific articles for the APES curriculum

We recommend the following 9 scientific articles which cover each of the College Board’s AP Environmental Science units.

Each article is adapted from an academic research paper published in a peer-reviewed journal, re-written for students, and reviewed by the researcher.

Each article contains an introductory video as well as questions to assess the students’ understanding.

Abstract: Living creatures need the sun to survive, either directly through photosynthesis or by consuming biomass produced by photosynthesis. But is this really true for all of them? Some organisms survive in the deep sea – where there is no sunlight – using energy from our planet instead of our sun in a process known as chemosynthesis. In this article, scientists investigated the productivity and metabolism of microorganisms living on the seafloor around deep-sea hot springs.

Abstract: We know that the climate is changing. All living things have one of three options: move, adapt or die. Migrating to a more suitable climate is a typical response from animals. But plants, which we think of as stationary organisms, can do that too. In this article, scientists model ecosystem distribution in different future climate scenarios.

Abstract: Mosquitoes aren’t just annoying, they can carry deadly diseases as well. The main way to control these diseases is by controlling mosquito populations. In order to do that, researchers have to study the ecology of these populations; they have to track the mosquitoes. Mark-release-recapture (MRR) is a great method to estimate the population’s size and other information.

Unit 5: Land and Water Use

Abstract: Fishing is important, but if fishermen are not careful, they can overfish and damage the ocean habitats with their fishing gear. So, many people are working to protect the ocean. However, sometimes people living closest to the ocean worry that protecting it might harm their jobs. In this article, scientists show that protecting the marine environment can actually benefit fishermen.

Abstract: Wouldn’t it be great to find a fuel that powers our cars and planes without polluting the environment or warming up our planet? Fuels made from plants, like corn or sugarcane, called biofuels, appeared to be more climate-friendly than burning fossil fuels. Unfortunately, it turns out that many biofuels are no better, if not worse, than their fossil fuel counterparts in their impact on our climate. This is because they use up more fossil fuels in their production than they were meant to save! In this article, scientists wanted to develop more climate-friendly biofuels by applying conservative management strategies for the crops.

Abstract: Air pollution harms people’s health. During the first few months of the global COVID-19 pandemic, many countries went into lockdown. Many adults worked from home, children went to school online, and families limited their trips outside of the home. Fewer trips outside meant fewer cars on the road and planes in the air. In this article, researchers wanted to know whether the change in people’s driving and flying habits resulted in better air quality. Using satellites, weather stations, and traffic data, they found out that it did!

Abstract: According to the World Health Organization, 1 in 3 people on Earth don’t have access to safe drinking water. No matter where you live, people need clean water. Think about it. We need water for drinking, cooking, bathing, handwashing, and growing food. We need water to survive. Copper is a contaminant that makes water unsafe to drink. In this article, scientists created a new material to remove copper from our water resources.

Abstract: In this article, students are invited to consider how their purchases affect climate change. Scientists assessed the carbon footprint of people living in different parts of Europe by calculating the amount of greenhouse gases produced by their consumer lifestyles. We encourage students to become conscious consumers and buy less to reduce their carbon footprints.

You can find many other free adapted scientific articles for each of the AP Environmental Science units: 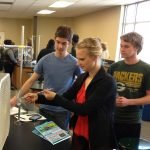 Researchers found out that beavers’ activities can protect plants and animals around them during a wildfire.

How do some algae make the Earth warmer?

Scientists figure out how and why algae produce nitrous oxide, a greenhouse gas stronger than carbon dioxide.

What can ancient DNA tell us about Stone Age people?

Researchers analyzed DNA from the oldest Late Stone Age human specimens ever found in Europe and discovered that these people had recent Neanderthal ancestors.

Wanna know when we publish a new article?