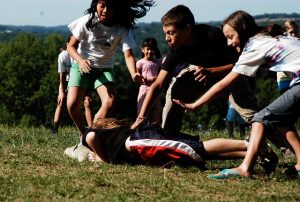 Can you escape from the catfish? – an educational game of tag

The following game is designed to help kids understand the negative effects that European catfish have on the migration of other fish. The game is meant to generate a more dynamic learning environment that allows children to move around and learn in a less academic way. It is important that it is approached as a learning activity and not just a game.

There are a number of fish species that migrate from the Ocean to Western European rivers. This game focuses on allis shad, sea lampreys, and salmon. All three species are affected in their migration by human activities such as fishing, dams, and pollution. Furthermore, all three have been found to fall prey to European catfish. Therefore, since the introduction of the catfish into the western European rivers, all three species have found it harder to migrate and thus to reproduce. The aim of this activity is to adapt the typical game of tag by introducing some of the concepts related to the selective pressure that catfish exert upon the three mentioned species.

The game is based on the articles “Why are catfish bad neighbors for allis shad?”, “What happens to sea lampreys if catfish move in?”, and “What if a salmon meets a catfish?”. It would be useful to read the articles in advance so that children can be introduced to the concepts that appear.

Rules of the game

In order to play the game, the classroom must be divided into 5 groups: allis shad, sea lampreys, salmon, catfish, and humans (representing fishing, pollution, and dams). Ideally, each kid would get a representative sign for the group they are part of; for example, a stamp or a sticker. It is important that there are more prey-fish than predators; the number of each must be adapted depending on the classroom size, but ideally, there would be at least two humans and at least two catfish. The game is best played outdoors, for example in a playground.

Firstly, the space should be presented as a river. From the perspective of a migratory fish, there will be a starting point (where the ocean meets the river) and an endpoint (where they migrate to reproduce). Right before the end line, there should be a mating area where fishes must find another player of their species in order to be able to cross the finish line.

The catfish and humans get distributed along the river and the rest of the fish get placed at the beginning of their river. Once the game starts, the fish must try to get to the end and complete their migration without being caught by the catfish or the humans.

The rules of the game are as follows:

Rules can be added progressively. In fact, it might be wise not to include catfish in the first round. This will allow students to clearly see the impact that catfish have on the migration of other fish. After the game, it would be interesting to encourage the kids to have a discussion on what they have seen and help them connect the game with the theoretical concepts.

What if a salmon meets a catfish?

What happens to sea lampreys if catfish move in?

Why are catfish bad neighbors for allis shad?

You can find a summary lesson on this topic at Case Study on Invasive Species for 5-9th Grade Students.

Find hundreds of other FREE scientific articles about fish, invasive species, migration, water resources, and biodiversity and conservation at Science Journal for Kids – written for kids, approved by scientists. 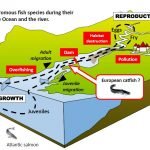 What can graves tell us about gender identity?

Archaeologists wanted to find out who a person buried in an early medieval grave with jewelry and swords really was.

How do we find a planet in another galaxy?

Scientists found evidence for the first possible planet ever to be detected in another galaxy.

How can we predict bone loss in astronauts?

Researchers wanted to assess and predict bone loss in astronauts caused by spaceflight.

How could baby dinosaurs live in the Arctic?

Scientists wanted to find out whether dinosaurs could have lived year round and nested in the Arctic.